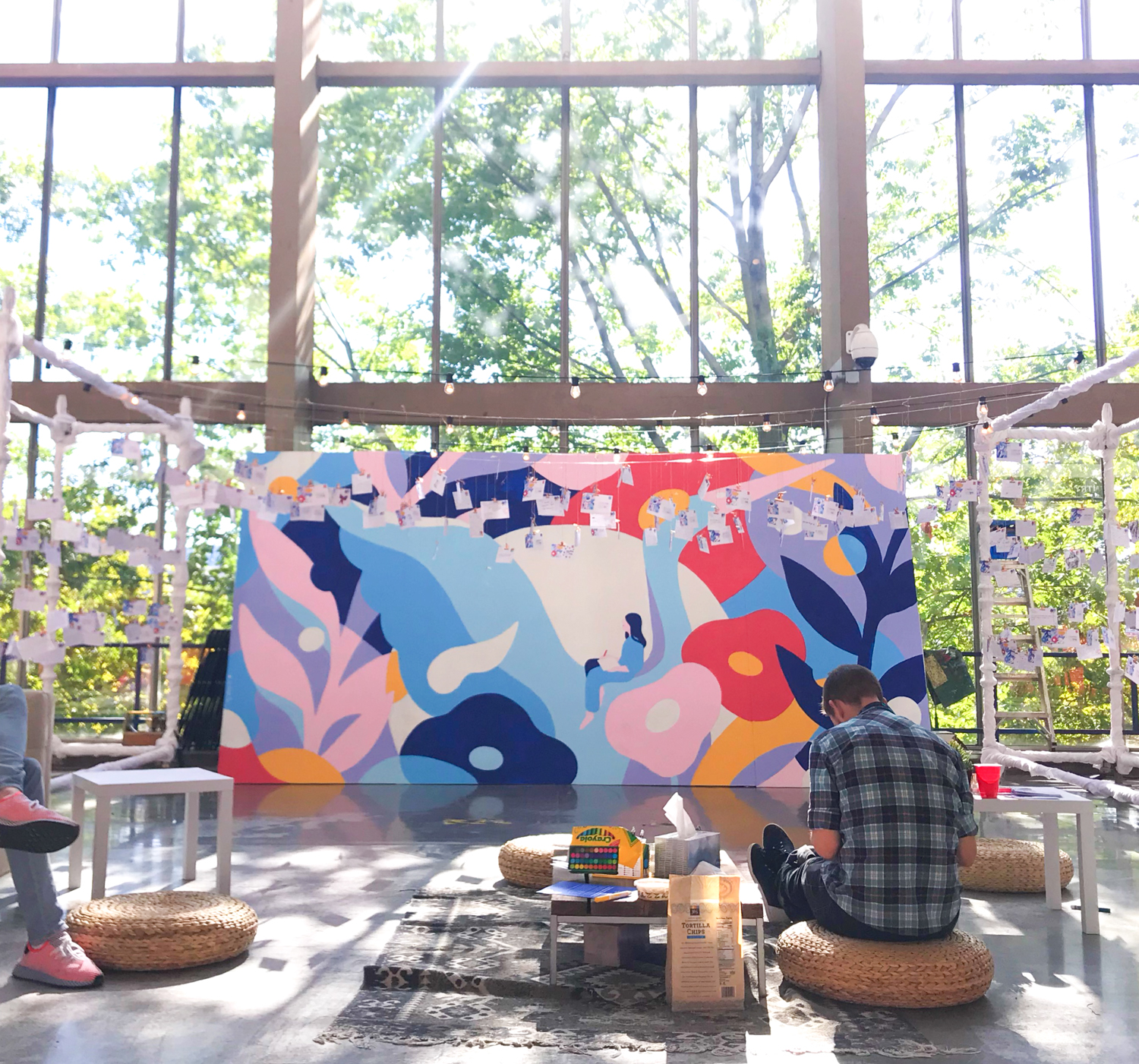 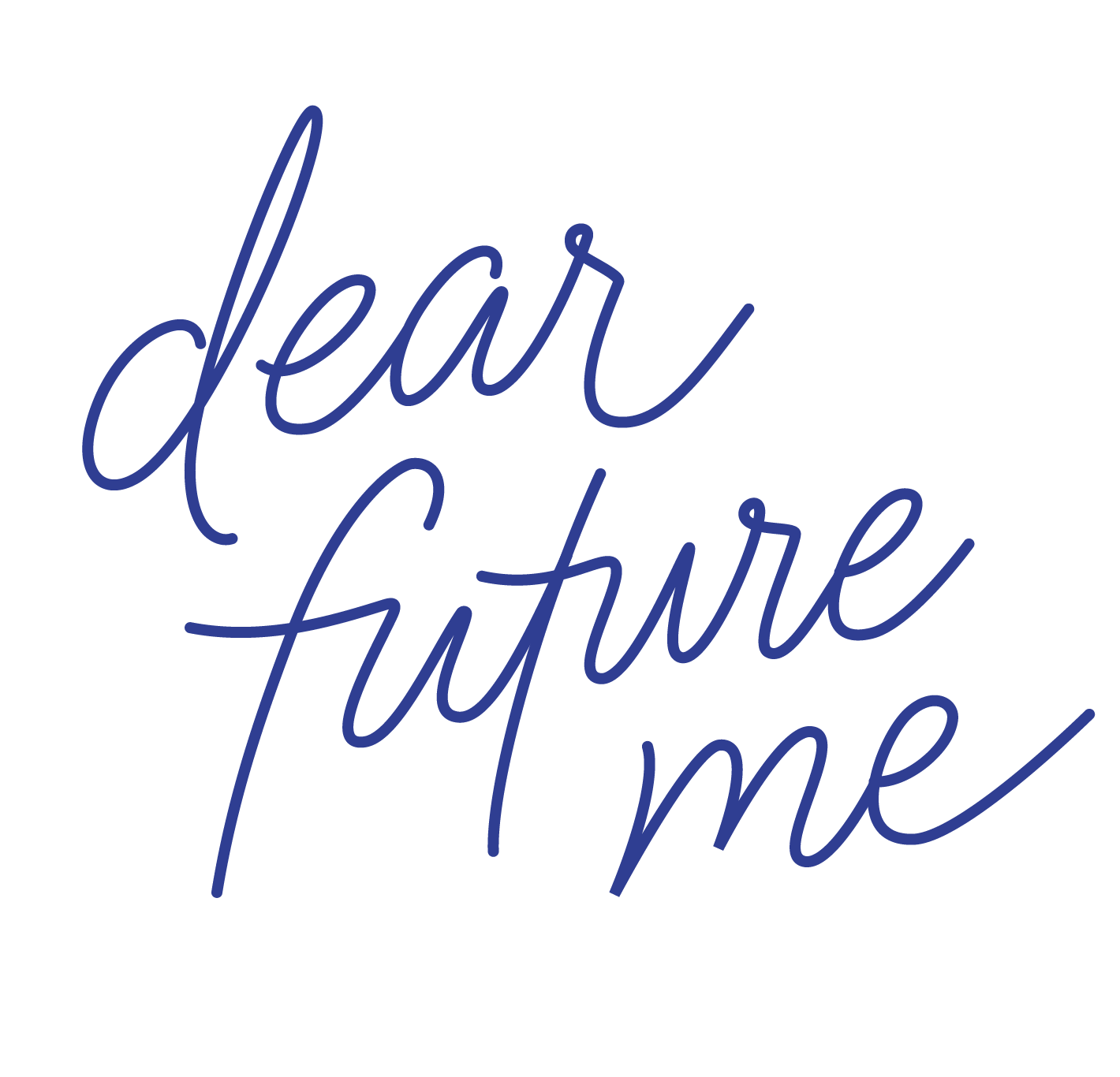 For the 2018 XOXO Festival, I created the interactive installation Dear Future Me — in which participants were invited to write a letter to their future selves alongside a mural that I simultaneously painted in real time.

The letters were hung up on around the mural by delicate rose gold threads, gleaming and glittering with participants' inner ruminations and introspections, fears and insecurities, and hopes and dreams for the future.
‍ 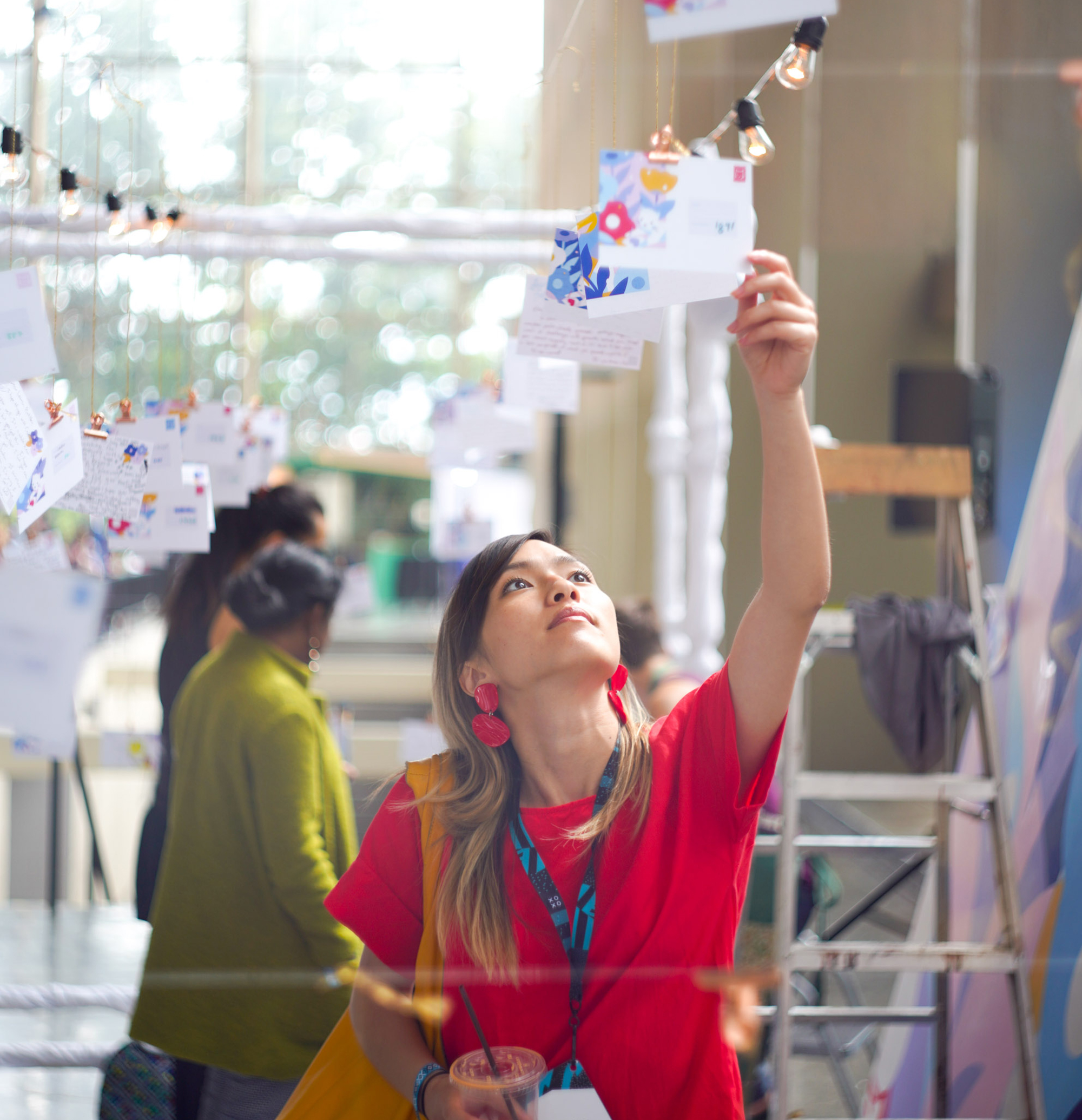 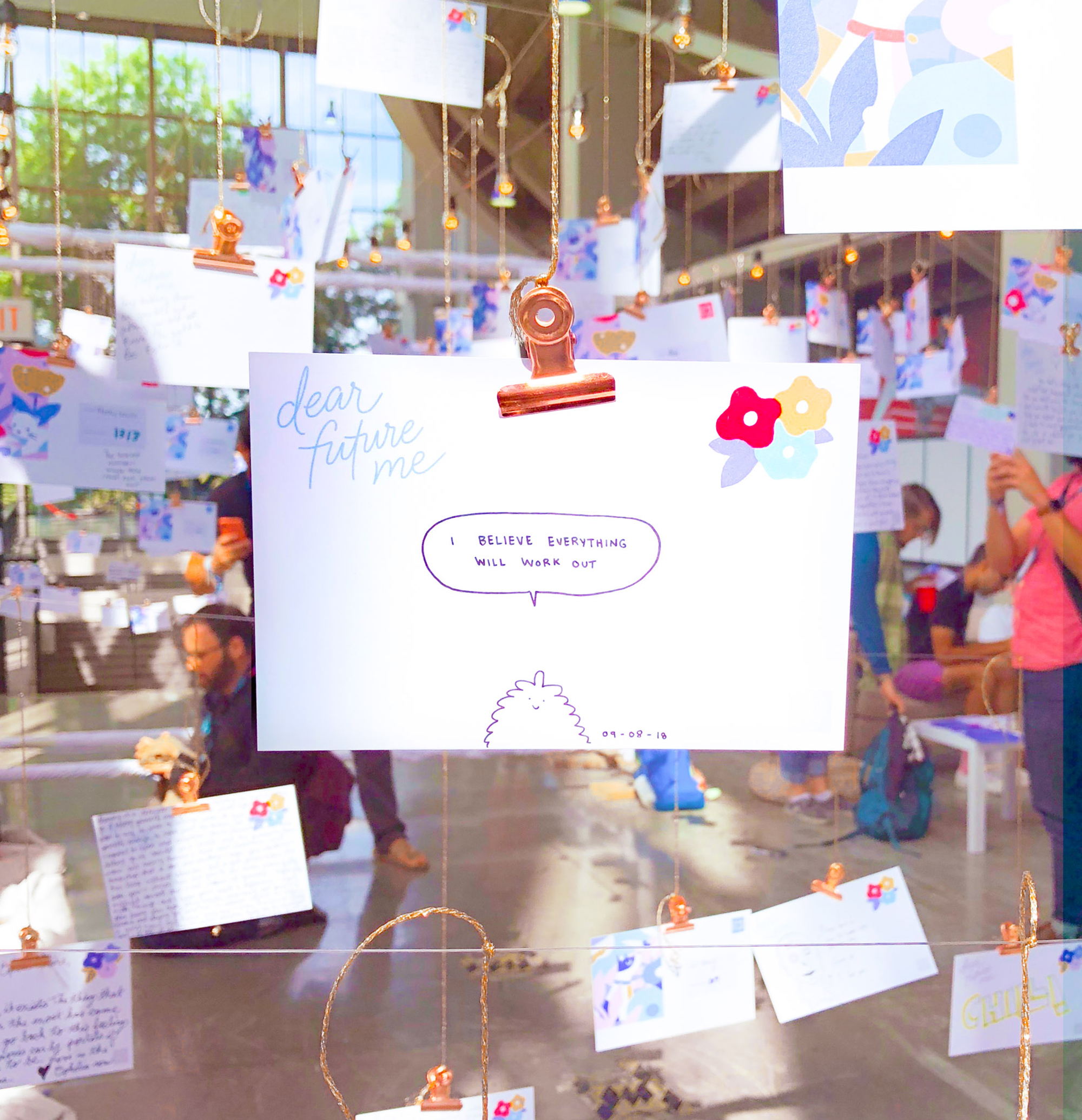 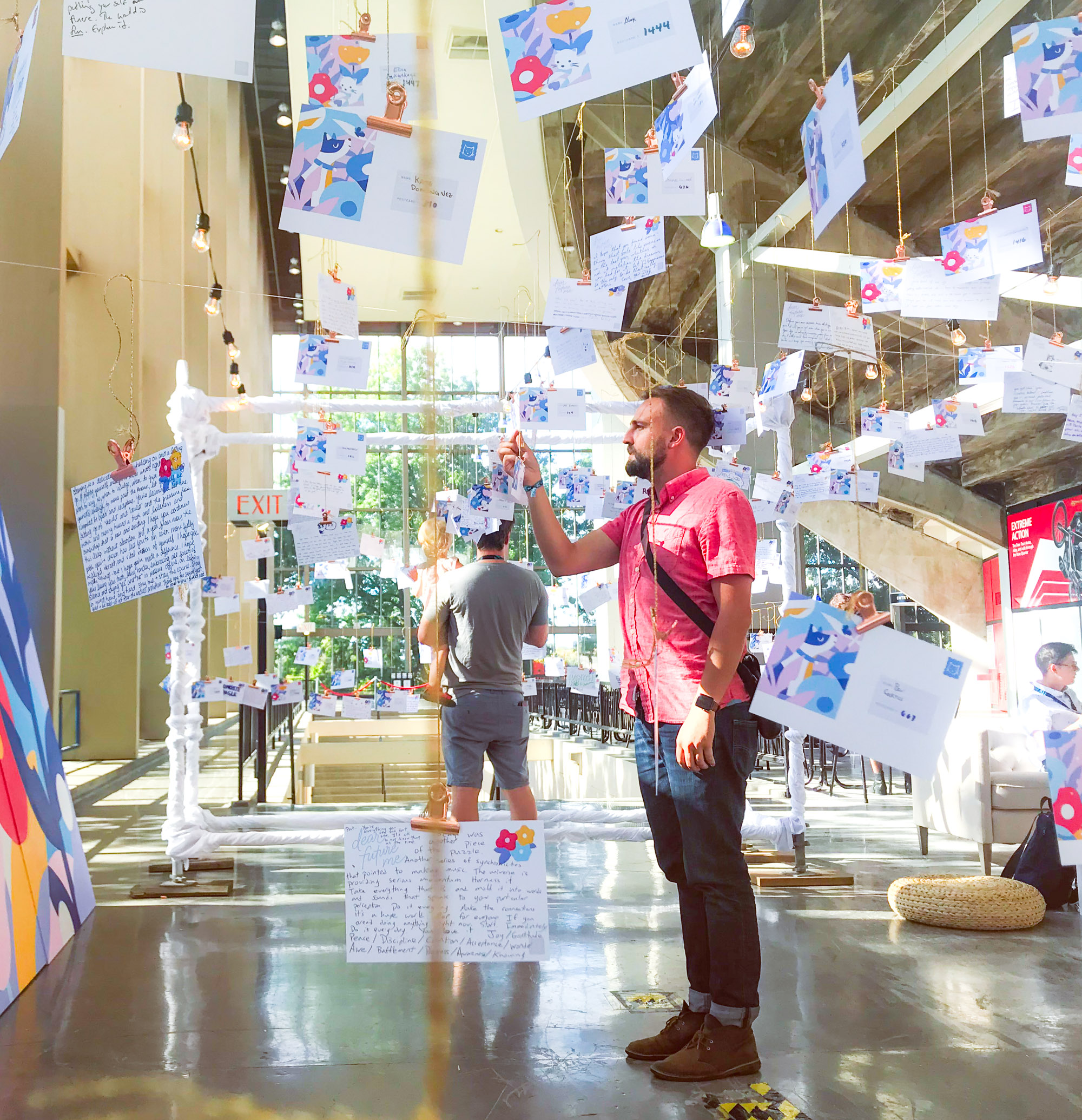 Installation format
Introspection ⇄ connection
As part of Dear Future Me, participants wrote letters to their future selves, which were then hung up as part of the installation.

During this process, I simultaneously painted an abstract mural of a girl writing a letter to her future self with my painting assistant extraordinaire, Maggie Waulkyn.

As the festival unfolded, more and more beautiful letters were added to the installation, as the mural also neared completion in tandem.

A year after the festival, the letters were mailed out by XOXO to the participants, as a cherry on top. I am a big believer in journaling as a tool for self-reflection, and I hope that the letters sparked some interesting inner dialogues within for the several hundred participants in this installation. 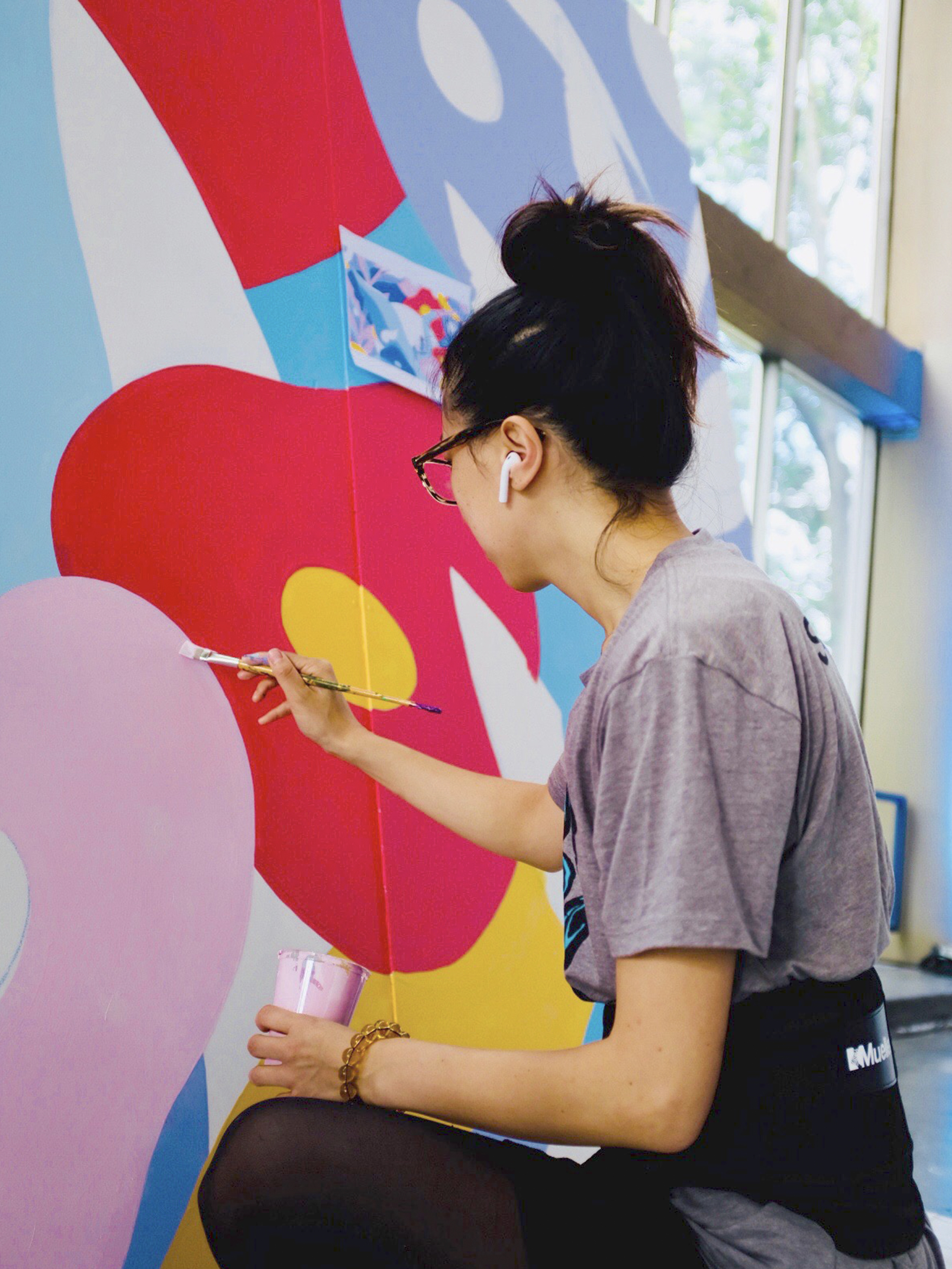 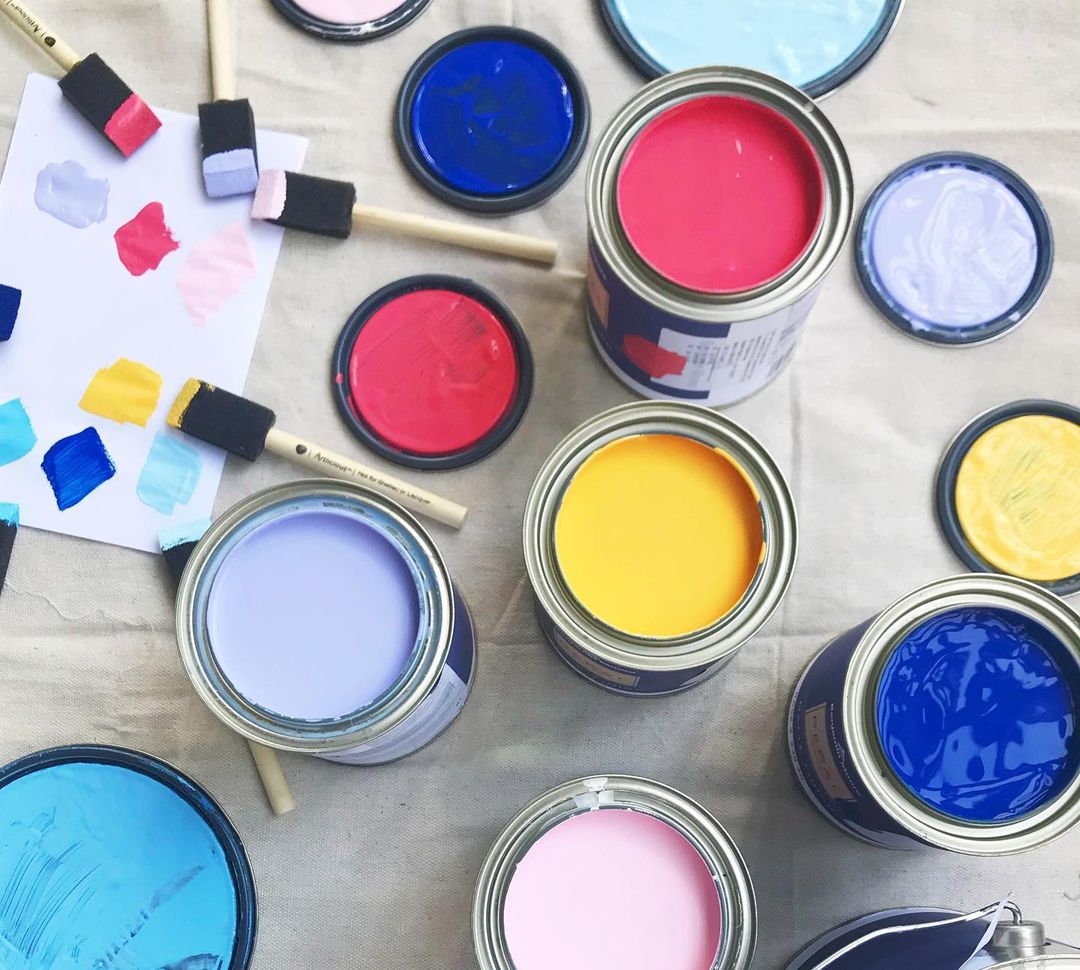 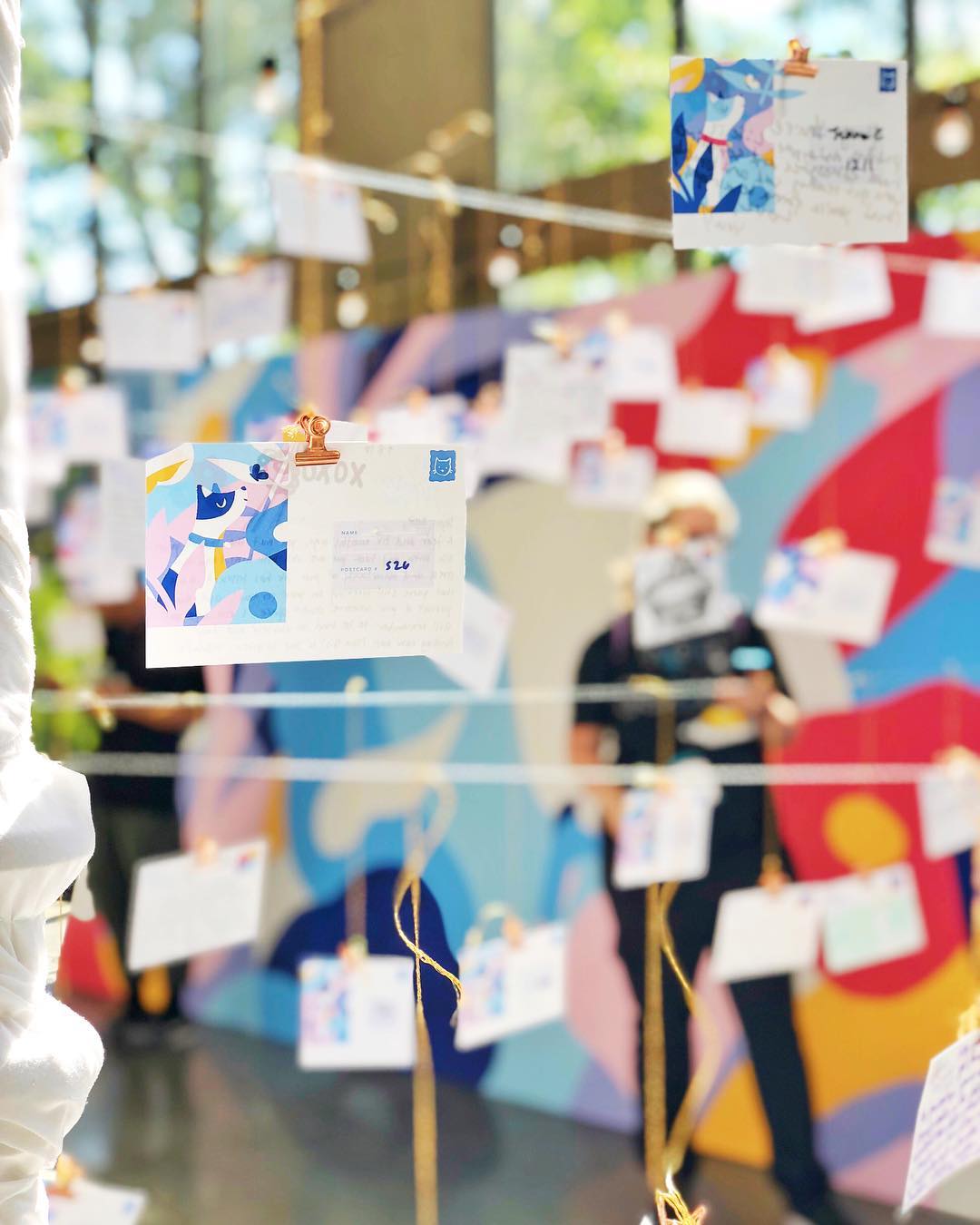 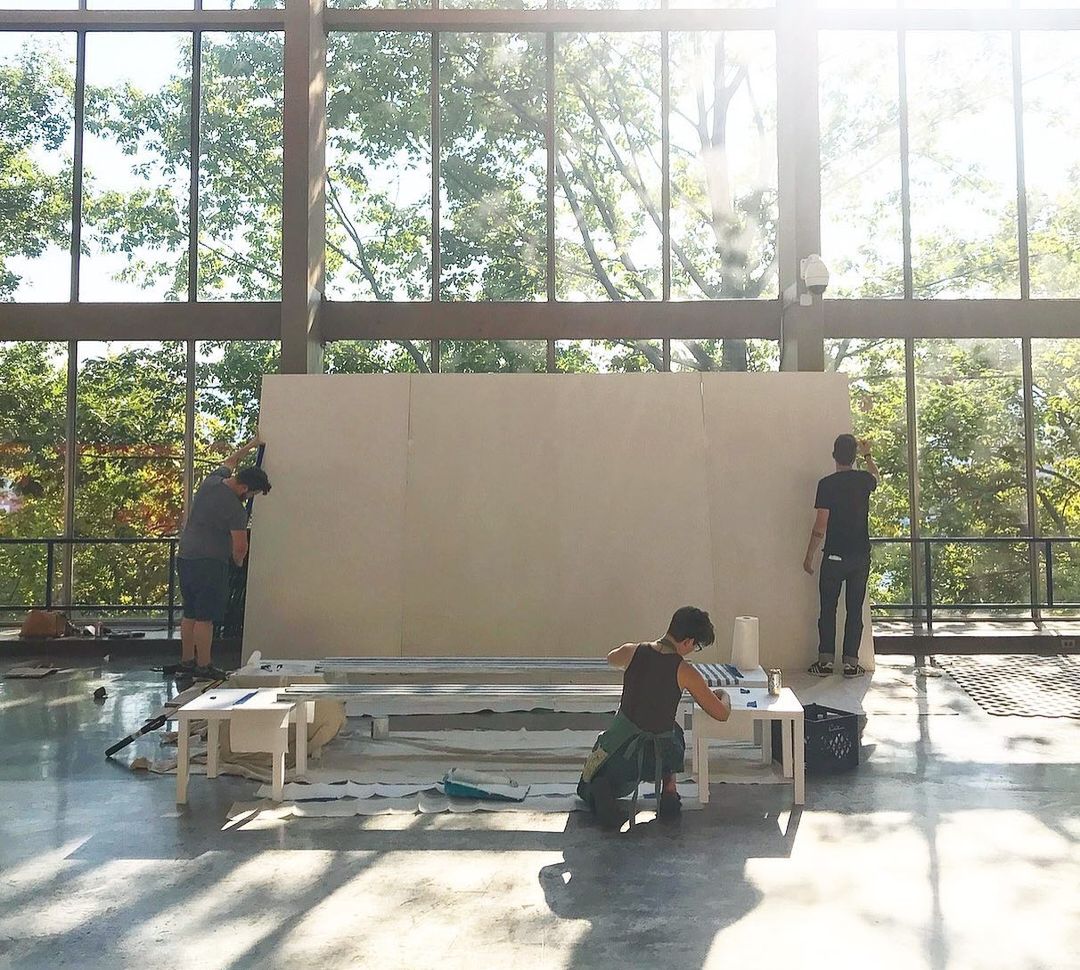 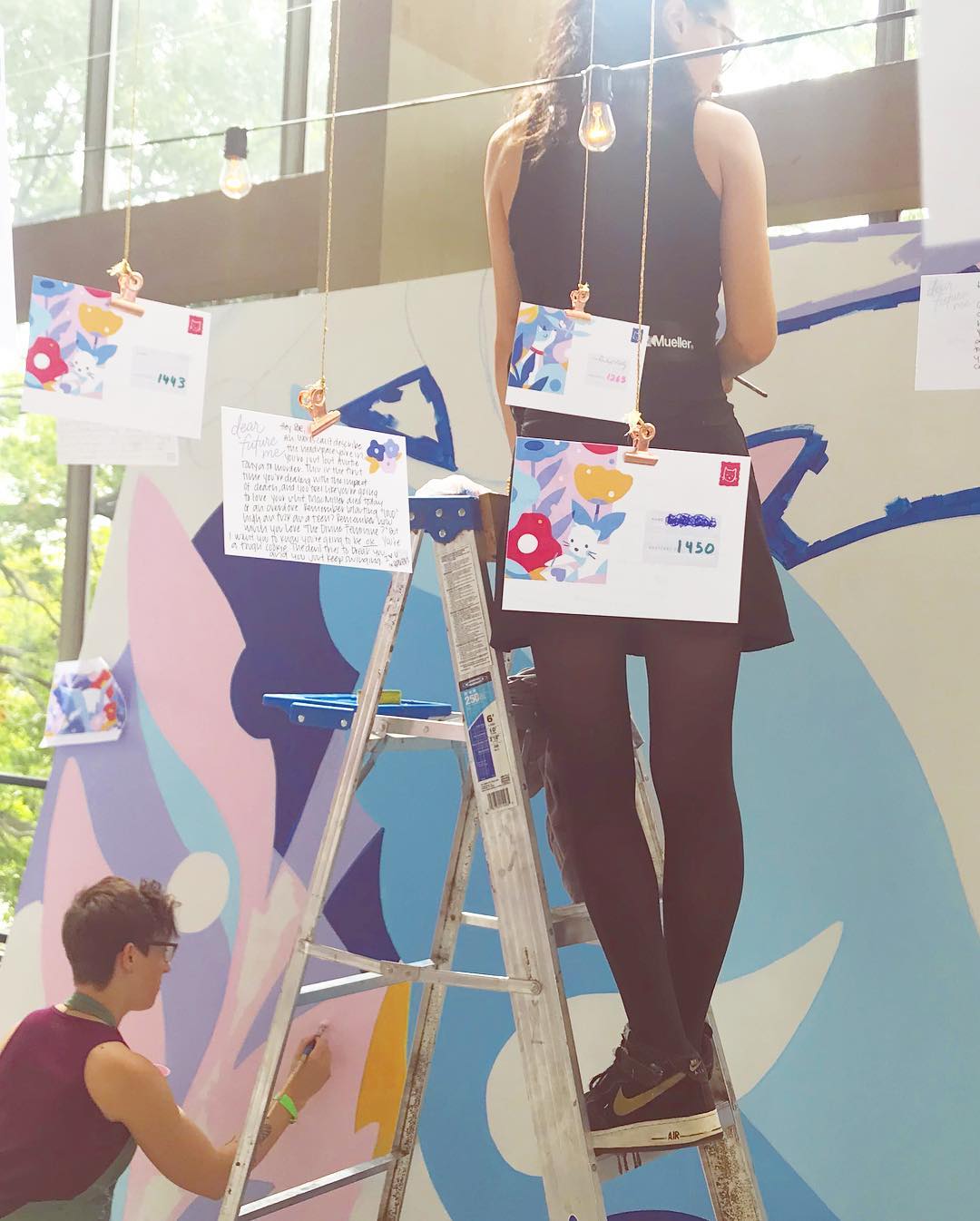 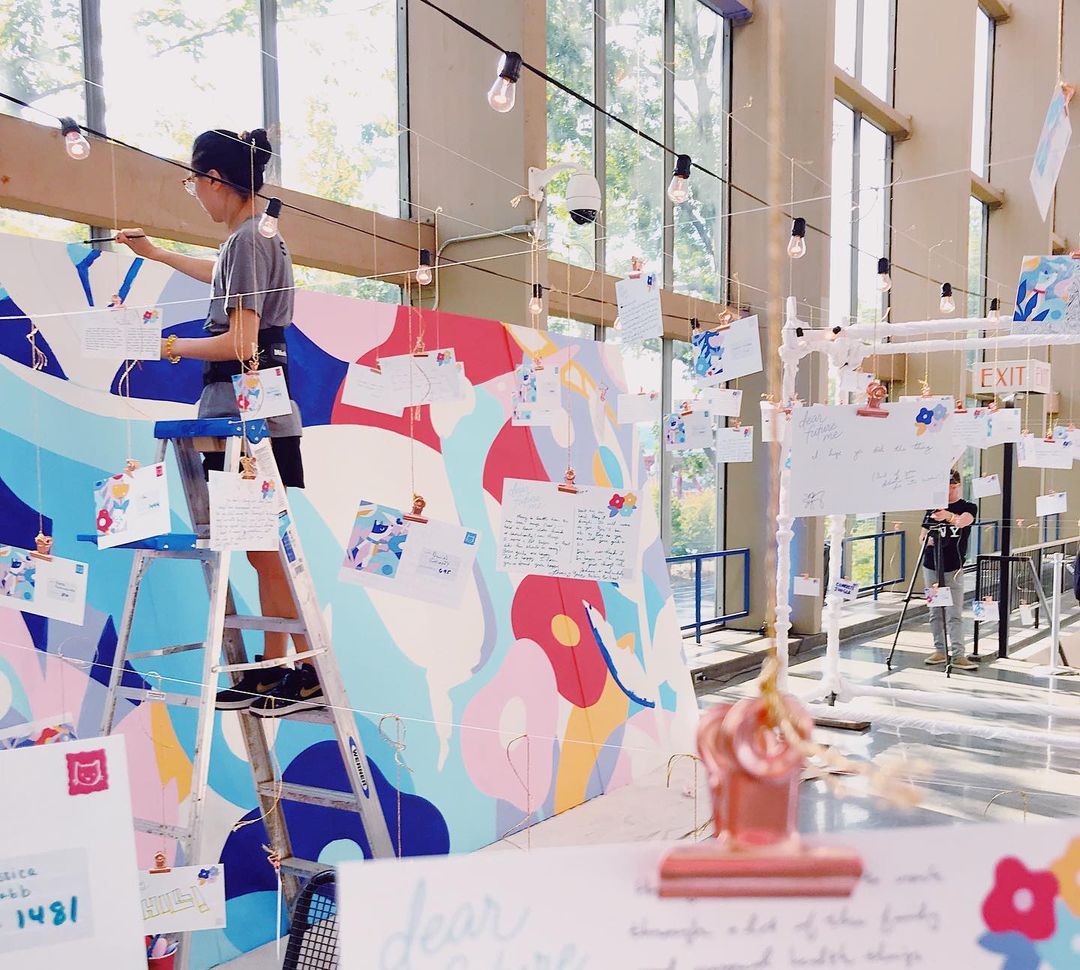 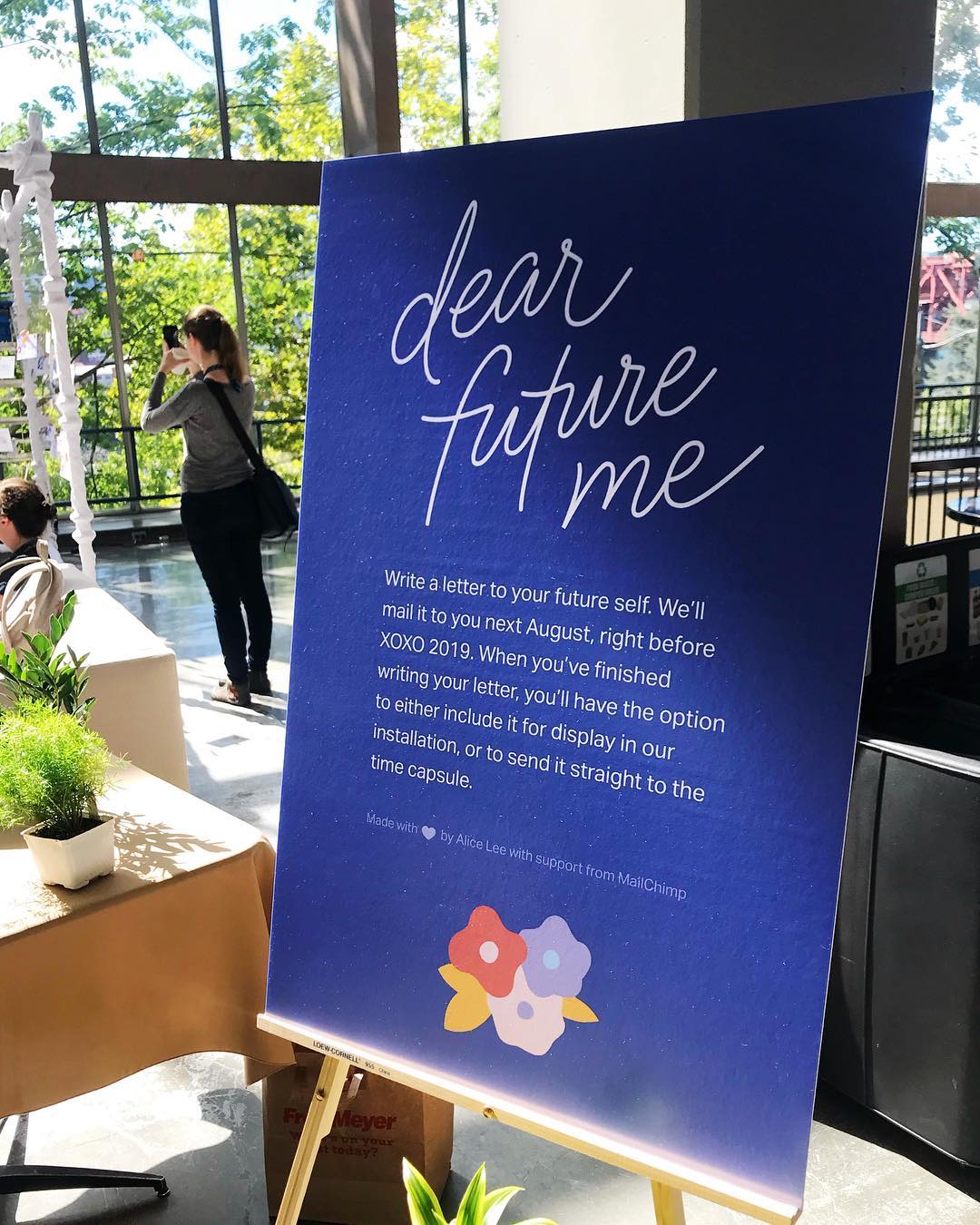 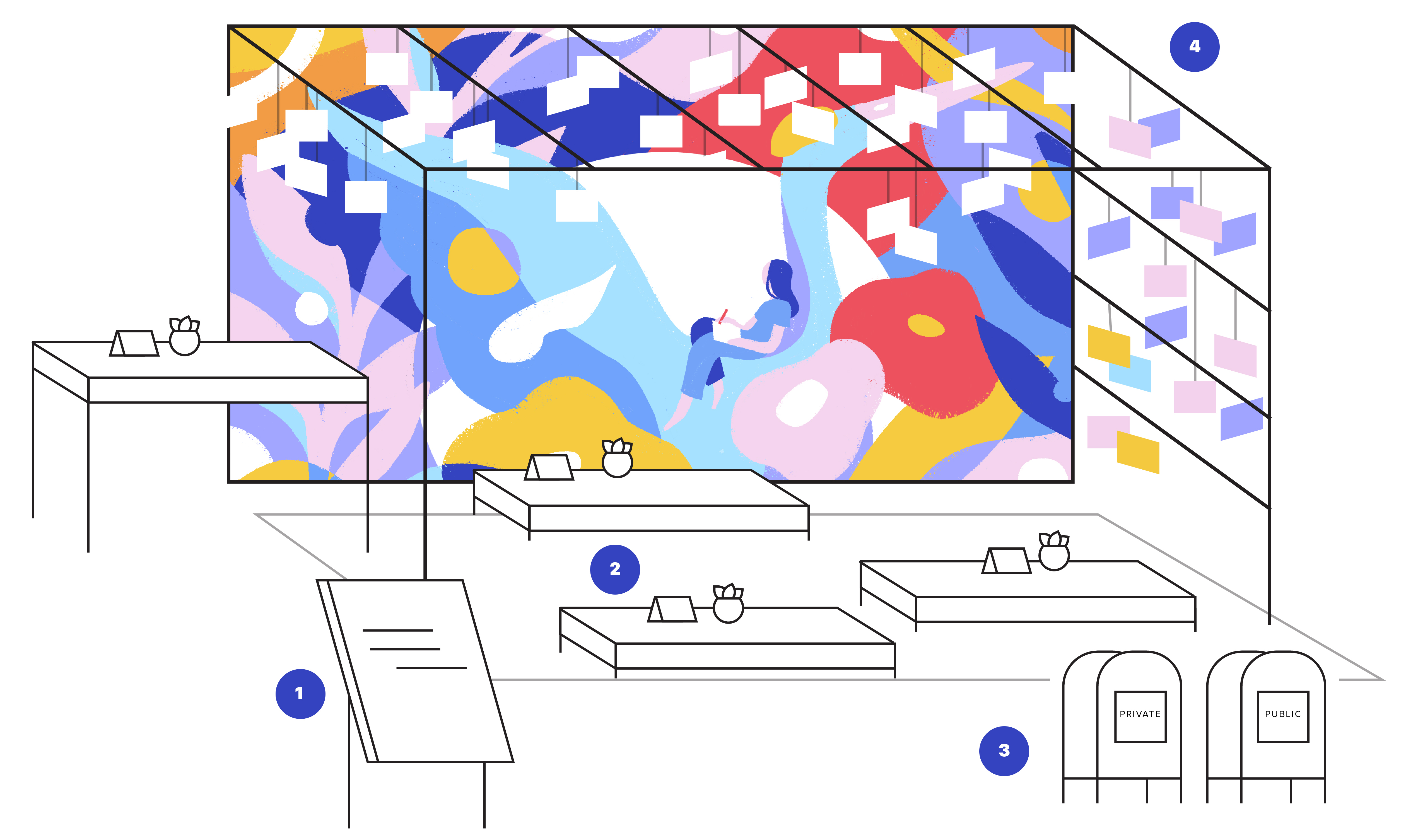 1. Introduction
Participants came to the installation and were instructured to write a letter to their future selves.
2. Writing the letter
Using one of four different illustrated postcards, participants wrote their letter. They could sit on the floor (rugs, cushions), at tables (couch), or at standing tables.
3. Dropping it in a mailbox
Participants then dropped their card in either the private or public mailboxes. Letters in the former mailbox were displayed publicly.
4. Live experience
After finishing their letter-writing, participants could read the other letters in the installation, and also observed me live-painting a mural surrounding this experience.
We designed the space to encourage introspection as well as discovery — filled with cozy couches and cushions, writing tools, and tables set at different heights and cluster formations to accommodate those who wished to socialize as well as those who wanted to quietly reflect on their own. 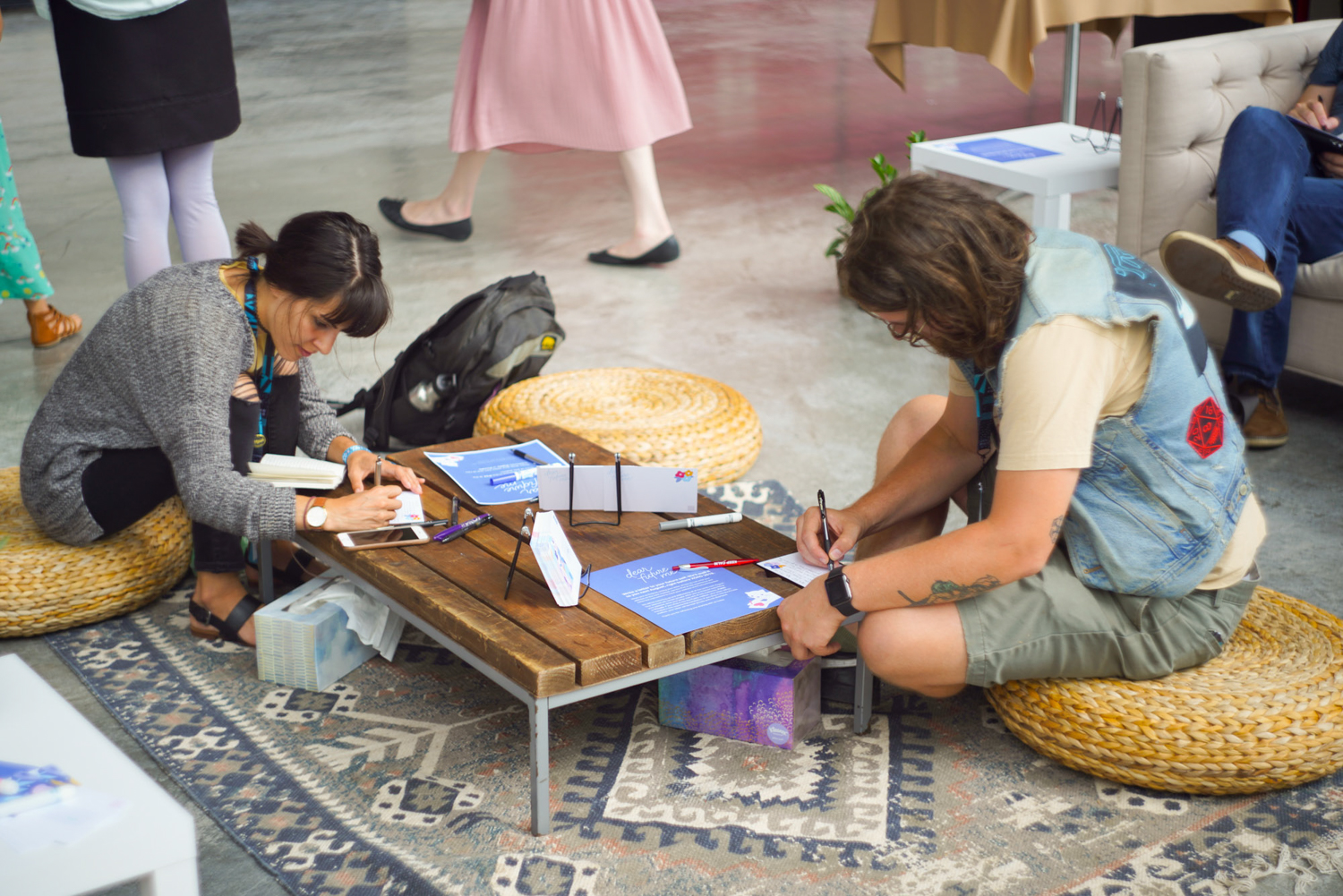 I wish that photos adequately captured the vibe of the space that was created. Some of the letters were funny and light-hearted, some were serious and touched on deeply personal and vulnerable topics like mental health.

It wasn't an uncommon experience for me to be painting and hear sniffles from the corner — from a participant writing to their future self, or reading another's touching letter. At night, the lights would come on and reflect off of the rose gold threading and clips that suspended the letters in the air— producing a twinkling, ethereal glow in the space.
The real story
Unexpressed emotions never die
Justin Yee
Justin Yee
When XOXO co-founder Andy Mcmillan initially reached out to me to potentially create a mural for XOXO, I was thrilled. The opportunity came about at a time, however, when I had just undergone a major life change: the break-up. You know that stage right afterwards, when it's as brutally fresh and stinging as it'll ever be? Devastating, dark. Disbelieving, numb and disconnected. That's where I was.

So, creating this mural was an act of healing for me. I had all this dark shit swirling inside: sadness, rage, grief. And I needed to (healthily) express it to move forward. As Freud said: "Unexpressed emotions never die. They are buried alive and come forth later in uglier ways."

Was it real? Was all in my head?
Would it fade, like it was nothing?
Would this come to pass?
Would I ever find love again?
Would he forget me? 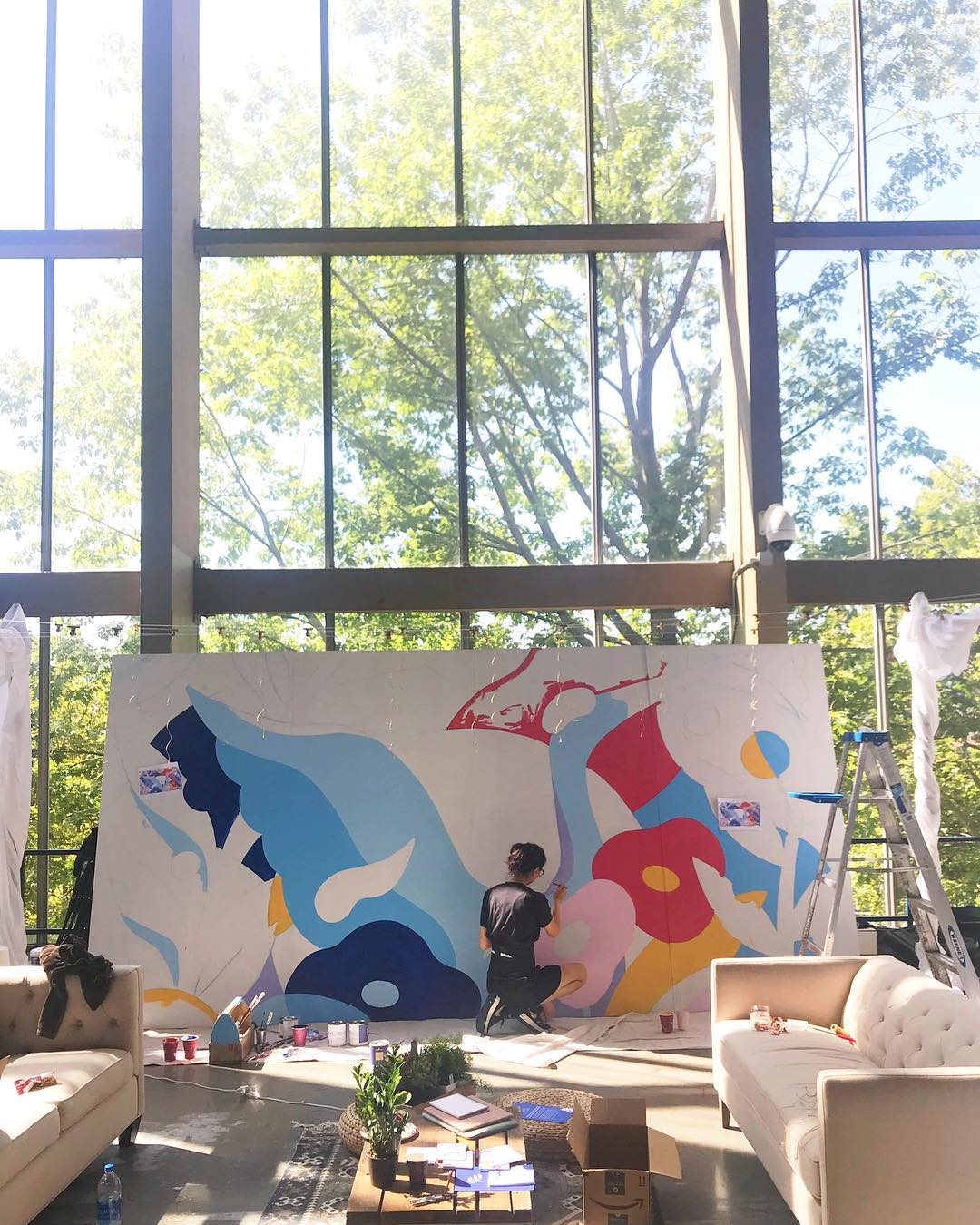 ‍I channeled that personal energy into this installation, which at its core, sought to accomplish two things:

But it also had a third, secret intention:

3) To allow myself the space to cathartically express my feelings and connect with community, so as to create something beautiful and light from a place of darkness.

No matter what, pain is still pain, and must be felt and faced in order to move through it. But I've found that holding that pain, naming it, and transmuting it into something new — shared, from hidden darkness to the light — is one way to process and heal. It doesn't lessen the pain, but it adds sweetness to the burn. Something that tastes like hope, perhaps, for a future self.

Healing through the canvas→ healing in real life.
If you were a part of this installation — whether as an organizer, a participant, or even an observer from afar — thank you. Thank you for being a part and taking the time to self-reflect and connect with yourself. I hope that you find what you're looking for. 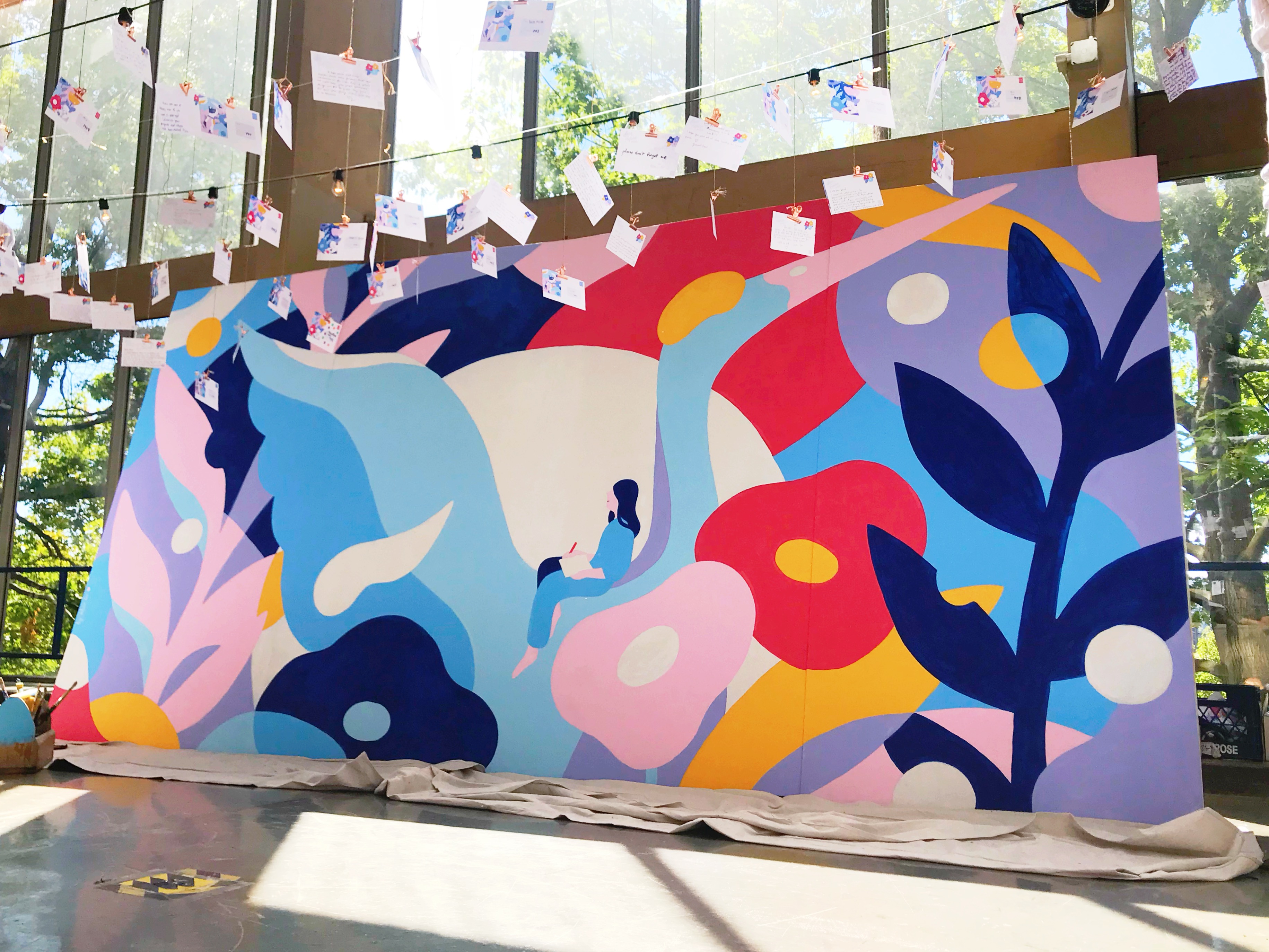 Mike Meyer, who helped with logistics, photography, and is in general just an all-around Good Ass Friend 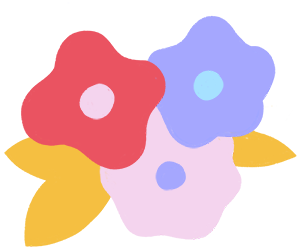